Written by
admin
Posted in
Posts
Comments
Leave a comment

It was a cold Sunday with an anticipated high of 31 degrees with a stiff breeze out of the northwest.  Launched at 10AM and met my good friend Kevin at the ramp who was also launching with his buddy Ken (I think that was his name).  I launched from the Bonwell ramp near the dam and was mostly testing my boat motor.  I had been having trouble with it lately.  It would start fine in the morning and run great for several hours of typical stop and go bass fishing.  Then it would just not start at all.  It will crank just fine but not even try to start.  Like it’s not getting spark.  Well I replaced the kill switch, the starting battery, and the spark plugs.  Time to test it out.  I wanted to stay within a couple miles so I could get back to the ramp under trolling motor power if necessary.  I’d like to avoid bumming a tow off someone like I had to do last time (Thanks Derek and Rick!).  Turns out motor needs to see a professional Mercury technician…

Back to the report.  Water temps were 47 to 48 degrees and the water was up maybe 4 feet above winter pool which made it easy to use the now floating docks.  We had had a ton of rain so they were drawing over 3000 CFS which is a good amount on this lake.  Clarity at the dam was 2 to 3 ft which is also not bad at all.  I had only 2 rods on the deck.  One was, of course, a 7′ G Loomis 745 crankbait rod paired with a Shimano 200e7 reel with 15# Seaguar Red Label fluorocarbon.  This rod had a 1/2 oz Cincy Fisher Blade Bait tied on.  The other rod was a Dobyns Champion 734 with same reel paired to it (love those Curados) and had a 3/8oz Underspin and a Keitech 3.8 swimbait.  I targeted steep rocky banks.  I searched a while and finally marked a ton of baitfish and bigger fish beneath them in 18 to 20 foot of water.  I’m not good enough with my basic electronics to distinguish walleye from bass but heck this is fun fishing so I don’t care what I catch.  My first fish was a keeper smallmouth bass about 15″.  Although I threw the underspin a fair amount, all fish were caught on the blade bait.  Second fish in same general area was a 21″ walleye that had dinner plans with my wife and daughter.  I fished this first area a bit longer and foul hooked 4 giant gizzard shad.  I fished one area that had been a consistent producer and the fish were just not there.   Finally found another keeper smallie and finally a nice keeper smallmouth at just under 3#.   So all-in-all it was a good day of fishing.

Some reminders about fishing in the cold.  Micro guides are not your friend!  I love my Duckett Micro Magic rod and usually use that for blade baits (although a crank bait rod is probably a smarter choice for the treble hooks…) but the tiny guides bind up fast with ice buildup making for a lot of “professional overruns”.  Also it’s a good idea to let your boat soak a minute on the trailer as mine was lightly frozen to the bunks.  After a minute it thawed and floated off the bunks.  If you power the boat off the trailer you could rip off carpet and even you bunk boards so be careful there.  My non-hydraulic steering cables were pretty stiff all day also making for a good workout.  Naturally dress in layers so you stay semi-comfortable on the water.  Finally it’s a great idea to touch base with other folks who will be on the water so you can call each other in case of boat problems.  That’s the great thing about having a network of good fishing buddies like Kevin, Rick, Derek and countless others. 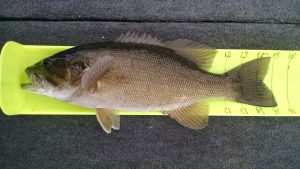 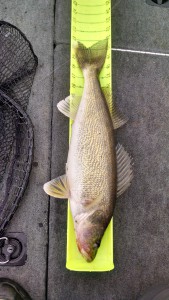 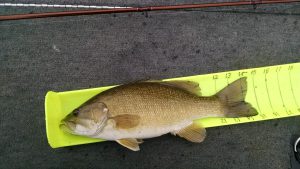 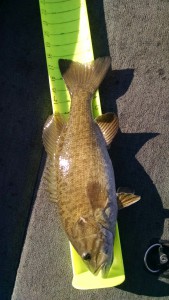